Purple Haze, written in 1966 and recorded in 1967 by The Jimi Hendrix Experience and released as a single (Hendrix's second) in both the U.K and the U.S. "Purple Haze" has become one of the "archetypical psychedelic drug songs of the sixties" and is often cited as one of Jimi Hendrix's greatest songs, and for many is his signature song.

"I dream a lot and I put a lot of my dreams down as songs," he said in a 1969 interview with the NME, "I wrote one called 'First Around the Corner' and another called 'The Purple Haze,' which was all about a dream I had that I was walking under the sea." The term "purple haze" has been used to refer to LSD, due to the form sold by Sandoz, called Delysid, which came in purple capsules. Furthermore, Purple Haze is a particular strand of marijuana noted for it's 'purple' appearance, therefore this is the most credible referance as 'kissing the sky' means 'to get high'.

A common misheard lyric in the song is "'scuse me while I kiss this guy". The actual line is "'scuse me while I kiss the sky". In fact, it has even been documented that Jimi Hendrix himself perpetrated this mondegreen by actually using it as a joke while singing Purple Haze live in concert, particularly at the Monterey Pop Festival in 1967.(Wikipedia) 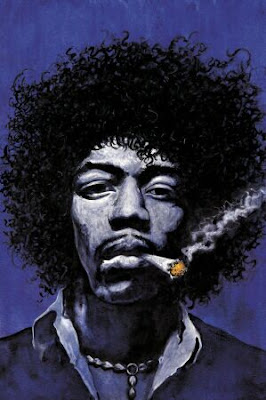