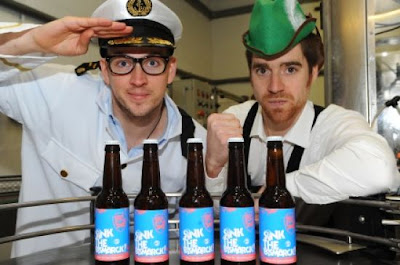 “A controversial Scottish brewery" has said it has reclaimed the title of the world’s strongest beer from German rivals – with Sink the Bismarck at 41%. BrewDog, of Fraserburgh, made headlines last year when it unveiled a 32% beer called Tactical Nuclear Penguin. However, Schorschbrau released the 40% strength Schorschbock. BrewDog said its newly released 41%, Sink the Bismarck, would cost $55 for a 330ml bottle and would only be sold online.
http://dodstrakigt.blogspot.com/2009/11/varldens-starkaste-ol.html
Upplagd av -DES- kl. 10:59