The Dark Alleys - Behind the green door 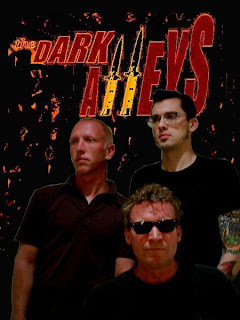 "(The) Green Door" Music composed by Bob Davie and lyrics written by Marvin Moore. The hit version of the song in the United States was recorded by Jim Lowe and it reached #1 on the Billboard Charts in 1956.

The lyrics describe a nondescript establishment, with a green door, behind which "a happy crowd" play piano, smoke and "laugh a lot," and inside which the singer is not allowed. There are references to lack of sleep or insomnia, which can be cured by marijuana in some cases. It is widely agreed by habitual marijuana smokers that music sounds a lot better while under the influence of cannabis. There is also a reference to 'laugh[ing] a lot' behind the green door. Uncontrollable laughter is often a symptom associated with marijuana consumption in any form.

Bill Haley & His Comets recorded a version for a single release on Decca Records during an unsuccessful attempt to make a comeback with the label that had made them famous with "Rock Around the Clock".

Psychobilly band The Cramps covered the song on their 1981 album, Psychedelic Jungle.

It is also behind the name of a live album by Irish American punk band Flogging Molly, Alive Behind the Green Door.(this may only reference the Irish bar in Los Angeles Molly Malone's where they record was recorded and has a green door. It is also where they Molly in their name comes from.)

Within the American intelligence community, "green door" is a slang verb, meaning to restrict an individual's or organization's access to information and/or locations. "We green doored them." 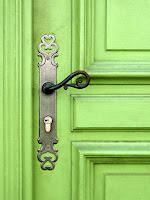