Some reasons to drink

1. If you don’t drink that booze, by God, someone else will.

2. The brewing industry alone employs 1.7 million people and that’s a lot of mouths to feed.

3. Bad ass nicknames like “Chuggybear,” “The Alabama Hamma,” “Pukey McPukerson” are not awarded to people who stay home to do laundry.

4. Your favorite bar stool needs just one more sitting to break it in.

5. This is the one and only night your soul mate will wander into the bar. Seriously.

6. Word on the street is the booze has been trash talking you all day.

7. Without your brilliant wit and charm all those poor bartenders will be so dreadfully bored.

8. Dude, after what you did last time, you gotta go back out there and explain yourself.

9. It’s far better to have a good time you won’t remember than a dull one you will.

10. You can bet something really important and worthy of celebration happened on this day at sometime or another.

11. How the hell can you walk around sober when you’re an insignificant speck in an infinite and uncaring universe?

12. If you don’t you’ll wake up in the morning all bright eyed and bushy tailed, and who the hell wants to go through life acting like a damn squirrel?

13. Your friends can’t have a good time without you.

14. Your friends might have a good time without you.

15. Your lawn is so much more comfortable when you’re loaded.

16. You’re much less likely to remember doing all that embarrassing stuff.

17. That feisty barmaid might finally, you know, pick up on what you’re laying down.

18. Your girlfriend has rented a bunch of chick flicks you can snuggle to.

19. You’re under a lot of stress and if you don’t get crazy drunk you might do something crazy sober.
20. You gotta figure the odds of getting thrown in the drunk tank twice in one month are practically negligible.

21. If you don’t hunt the booze, the booze will surely hunt you.

22. When you write your memoirs you won’t have to go through the hassle of making up a bunch of decadent adventures.

23. Al-Qaeda forbids drinking and since when did you start taking orders from Al-Qaeda?

24. Let’s face it: modern life is a shit storm and booze is the only umbrella without any holes in it.

25. 7-11 nachos with extra cheese substitute and chili only taste good when you can’t remember eating them.

26. Your boss gets all weirded out when you get drunk during the day.

28. The day will come when you will have to single-handedly face death, and there isn’t a person alive who can tell you what will happen next.

29. Hemingway shot himself after being sober for two months.

30. When your coworkers ask “What did you get up to last night?” you can smile all cool like and say “Maaaaaan, you don’t wanna know,” instead of chirping “I alphabetized my DVD collection and found out I have two copies of The Truth About Cats and Dogs! Two!”

31. Remember your childhood dream of meeting a brewery heiress and jet-setting around the world on her dime? You think that’s going to happen while sitting in your apartment watching Captain Picard surrender the Enterprise for the tenth straight episode?

32. It’s so much easier to ring up those old flames and explain exactly where they went wrong. 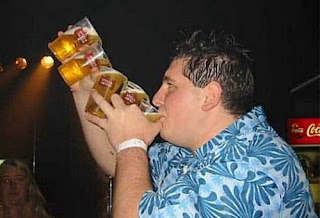